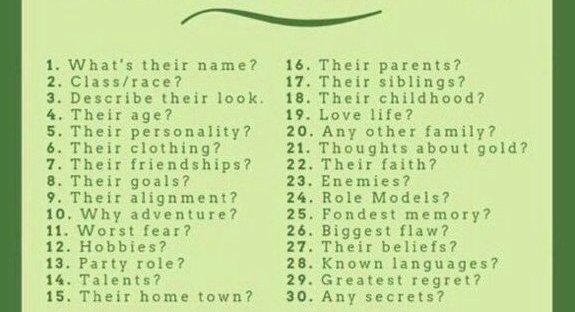 A few weeks ago there was a challenge on Twitter where each like on a post means another answer given. I’ve seen similar things before, but hadn’t participated because I wasn’t sure I’d get any likes. When I saw the RP Character Edition image above, I decided it was worth a try. I said I would do it for both Sriset and Syaine because they’re my “mains” on World of Warcraft.

To my surprise and pleasure, I received 24 likes and thus answered 24 questions. But I really wanted to answer them all and have them in one place, so that’s what this blog post is for. It was a great exercise for me because it helped me develop my original characters further for use in my Warcraft fan fiction.

Their clothing:
See number 3 for armor, but for casual…
Sriset – shirt, pants, comfortable shoes
Syaine – mostly shirts and pants, but a revealing dress on rare occasions

Their friendships:
Sriset – friendly with just about everyone she meets due to chatty nature, loyal friend
Syaine – few friends but fiercely loyal and supportive of those friends

Their goals:
Sriset – try not to get lost and/or accidentally run off a cliff or into danger, survive, have fun, tame lots of pets
Syaine – survive, avoid notice, honor her family name, make amends for her dark past

Their alignment:
Both Sriset and Syaine trust their gut and do their best to follow their internal moral compass. They try not to judge others based on the opinions of the masses.

Why adventure?
Sriset- it’s the best way to find new pets, make new friends, and have fun!
Syaine – financial regards, trying to do good, keeps her busy enough to distract her from thoughts of her past

Worst fear:
Sriset – getting lost permanently
Syaine – that she’ll never be able to atone for her past

Party role:
Sriset – going the wrong direction on quests and in dungeons, trying not to aggro everything, dps when she’s doing the right things
Syaine – picking locks, sapping, sneaking, dealing as much damage as possible in clever ways

Talents:
Sriset – getting lost in even the most familiar cities, trying to tame a druid in bear form, making people laugh
Syaine – hiding knives all over her body, being at the right place at the right time, vanishing at a moment’s notice

Their parents:
Sriset – father is a paladin, mother is a mage, both alive and well and living in Fairbreeze Village
Syaine – both parents were priest and peaceful people, killed in a Legion attack

Their siblings:
Sriset – oldest of 4 sisters: Solunai, Salxi, and Lindrastra. Youngest sibling is a brother named Landrin, missing and presumed dead
Syaine – one older brother Denzarus, who was originally a priest but became a demon hunter after their parents were killed

Their childhood:
Sriset – happy childhood, fun-loving and amusing nature helped reduce any sibling tension because they all loved her
Syaine – happy childhood until the Legion attacked during her adolescence. Her older brother Denzarus looked after her for a while but she eventually became a rogue to survive after he left to become a demon hunter

Love life:
Sriset – always got along better with animals than other humanoids. Until one day when she tried to tame a druid in bear form…
Syaine – doesn’t believe in getting too attached to anyone, doesn’t think she’s lovable. Then she meets a shadow priest…

Any other family:
Sriset – she’s always considered her pets to be part of her family, lots of extended family she rarely sees
Syaine – most of her family was killed by the Legion and she lost touch with any surviving relatives except Denzarus

Thoughts about gold:
Sriset – it’s useful for buying food, armor, weapons, mounts, flights, and a room at an inn but she only has as much as she needs
Syaine – it’s always in someone’s pocket waiting to be picked, it’s a means to an end, she’s done terrible things for it

Their faith:
Sriset – she has faith in her animal companions and believes that everything will work out fine in the end
Syaine – doesn’t have faith in Elune anymore, has faith in her brother Denzarus even though he’s a demon hunter

Enemies:
Sriset – anyone who would harm those she cares about, she tries not to judge others based on their faction
Syaine – everyone is a potential enemy, there are several shady characters from her past that are still after her

Role models:
Sriset – her parents for their seemingly unending patience raising her and her siblings
Syaine – her brother Denzarus for sacrificing so much to avenge their family

Fondest memory:
Sriset – any day when she and her siblings were young, happy, and carefree playing in the woods around Fairbreeze Village
Syaine – quiet evenings around the hearth listening to her father tell stories about the great battles he had seen as a healer

Beliefs:
Sriset – everything happens for a reason, there’s no such thing as too many pets
Syaine – she can only rely on herself, she’s not worthy of love

Known languages:
Sriset – several animal languages, Thalassian, Orcish, Taur-ahe, Common
Syaine – all of them because it’s useful for a rogue to know what’s being said at all times

Any secrets:
Sriset – not really because she’ll babble about anything and everything
Syaine – many

Bonus question (created by me). Do they have a connection to each other?
Yes! As it turns out Sriset’s partner is the brother of a woman who accompanied Syaine’s brother Denzarus to become a demon hunter.

World of Warcraft player since 2008. Main toons are a blood elf hunter and night elf rogue. For Azeroth! View all posts by SrisetSyaine